I just returned from a trip to India, to visit my daughter who is working there in Mumbai.  Quite an experience!  And it wasn’t my first time in this land of jungle and jasmine – I went there when I was a student at university and spent 3 months in Bombay (as it was called then) during the monsoon months. 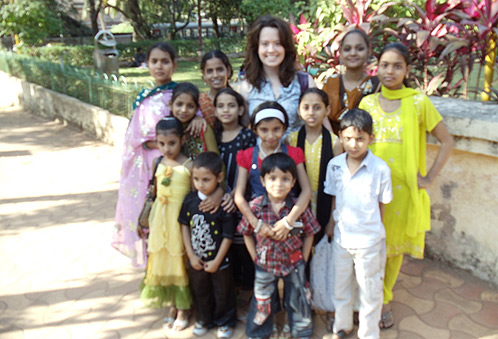 My daughter posing with a family who desperately wanted to have her in their family photo!

What had changed?  Well, there are shopping malls now and cell phones, more people, more pollution, more foreigners, more traffic, more litter, and more dust and dirt, but…the people are still so sweet, gentle, polite, and have a far deeper understanding of community than any of us here in the west…. On a five hour train ride to Aurangabad, (the site of ancient caves of Ajanta and Ellora), the seating section next to us, which consisted of two sets of three seats facing each other, separated by a table, soon filled up with a group of strangers, but by the end of the journey, there they were swapping stories, laughing, sharing their samosa snacks that had been bought from one of the many vendors who came on the train at each station, and by the end of the journey, they were even taking photos of one other.  Meanwhile the young couple opposite my daughter and me, were passing around their 10 month baby girl – all the other passengers took great delight in playing peek-a-boo with her and singing itsy bitsy spider, and then after she fell asleep, the father just laid a thin mat on the table in front of us and there she was tucked up fast asleep for the remainder of the journey. Such a delight to see all those people simply enjoying the gift of being together on a journey!
And of course, what I remembered from all those years ago, and what still delighted me this time, was… the Indian head wobble – everyone knows it now from all those movies and especially from that T.V. show, Outsourced.  It’s a very subtle movement of the head – sort of circular – a bit of a bobble mixed with a wobble.  It looks easy to do, but believe me, it takes practice.  But once perfected, it makes a wonderful addition to one’s repertoire of responses to life.  So nuanced, so fluid, so….conducive to pondering and mulling and musing.  It can mean anything from yes or no, maybe, perhaps, let me see, I don’t know, I’ll think about it, not sure, if you say so, depends, yes, but I might change my mind later, okay, no, but I don’t want to hurt your feelings, so I will just wobble my head like this until you get the message…….and that’s just the tip of the iceberg.  Wouldn’t it be nice, I think, to adopt such a reflective gesture here?  It would give us all what we yearn for…..TIME to think!

I also got to visit a couple of schools while I was there, and of course it was fun to share my latest book, Raj the Bookstore Tiger with the children, especially as it has such a nice tie-in to India, but more on that later…
( Below – my husband and I at the Daulatabad Fort, near  Ellora Caves) 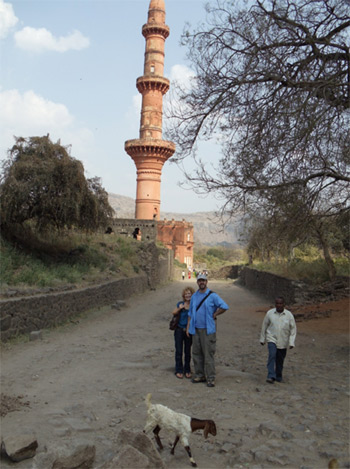 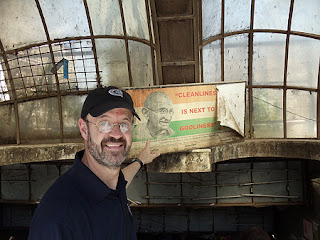 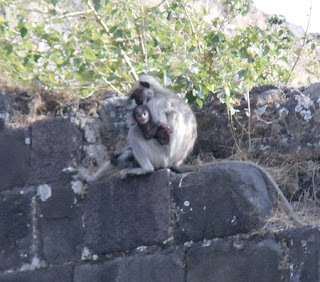